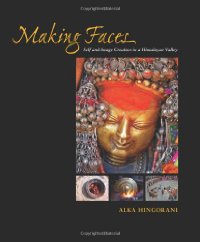 Making Faces . Self and Image Creation in a Himalayan Valley.

The new book about the mohras, the masks or busts in metal (usually silver or brass) which represent the gods and goddesses of Hindu pantheon explores a new aspect of the objects: how they are made by local artists. The author studied the region of Kullu (Himachal Pradesh)and the introduction gives a general frame about the history , the significance of Dashera festival in the local context and the time when the deities “travel”. The deities represented by mohras travel on the same ratha or palkhis (chariot) for few weeks. They have a collective identity and the author has emphasized that “the material and ritual biographies of such objects are important” (p.9).

The first chapter The Object describes the mohras which according to the author should be translated - face image-‘s of the gods and goddesses ( devis and devata).In fact the mohras are never worn; they represent the faces of the gods and goddesss. Like the Hindu statues of gods each group of mohras is covered with cloth of red or yellow colours, embellished with jewels and flowers. Eight to twenty four mohra are on each ratha (chariot) and generally represent a single deity. The history and the style of the mohra are difficult questions and the author has no clear answer. The illustrations and descriptions with ancient mohra are from a French collection of Michel Postel who has published a book about mohra, Antiquities of Himachal Pradesh, Bombay, 1985 (see the note 13 page 118).

The second chapter The Process is about the methods and manufacture of mohras (face image) and the parasol (chhatri). The second chapter is the most interesting part of the book: it gives a lot of details about the manufacturing of the mohras and the chhatri and the author observed the work of the artisans. The author stresses the continuity of tradition of forms in manufacturing the metal objects. What is particular interesting is the description of the rituals performed before the making of the mohras : it begins with the sacrifice of a sheep, offered to the Sheh nag . “Sacrifice is a mediating act between the individual or group that performs it and the deity to whom is offered” (p.42).The sacrifice is meant to appease the deity and also serves to protect the entire community. These remarks about animal sacrifice for instance, during the festival of Dashera, are pertinent for other parts in North India.The oracle (gur) of the deity is present at the sacrifice and went into trance. According to the author “ …Possession is both power and belief” (p.44).The oracle has to decide when the animal is sacrificed ; the head of the animal is set in the space where the work of the artisans has to start. Fresh blood is sprinkled all around the site where the artisans will manufacture the objects so the space became a sacred area. “The object is not just a cultural symbol it is also a manifestation of artistic skill of the artisan”(51). It follows a detailed description of the techniques of making the parasol and of an embossed mohra. The author distinguished “two kinds of mohras both in terms of their importance in the hierarchy and how they are made” (p. 66).

The author is trying to explain the meaning of aesthetics for the local people how they perceive the object .The chapter Speaking of aesthetics is general and doesn’t explain the importance of forms and proportions for the statues and objects in Indian art. It is well known that in Indian art as well as in Himalayan art there are manuals which indicate the exact proportions and the colours for the statues of the Gods and Goddesses . For Nepal and Tibet the sketchbooks used by artisans have been published. We can understand that for the shape and size of the mohra the artisans follow the oral tradition. The question if a religious object can be an object of art has been discussed by anthropologists and art historians before the opening of Musée du Quai Branly, in Paris. Not only a statue but also a ritual object can be considered an art object. For local people a mohra is first a sacred object after the consecration ceremony. The author emphasized that “In the Kullu hills artists work for a village or a group of villages beholden to the same tutelary deity. More correctly, they work for the deity or devata, who rules over such groups of villages” (p.83). Here we understand the link between the religion, the objects representing the gods and the social life in Kullu.

The most interesting part of the book is the detailed description of the rituals and manufacturing of the sacred objects. The illustrations are superb and help to understand the process of manufacturing the objects. Anne VERGATI, directeur de recherche honoraire, CNRS, Paris